A New Idea About Answering Questions

November 09, 2010
What if we made it our habit as group leaders to begin our answer to every question we're asked with:

"Here's what the Bible says about that..."

I don't mean that this should be done in a smug or snarky way, but in a way that makes it clear that we (particularly in our groups) should approach every issue (particularly those pertaining to discipleship and spirituality) by STARTING with the Bible's teaching on that topic.

Of course, some will read this and say, "But the Bible doesn't speak to ever issue!"

To which I will respond, "The Bible may not answer every question you can ask, but it most certainly addresses any topic topic which may come up!"

This approach to question-answering, problem-solving, strategic-planning, etc. may at first sound better than a visit to Pablo's Tacos on dollar-taco-Tuesday; but after a little reflection, some may not be too happy with this approach. Consider some of the ramification:

1) Our own personal opinions will be subjugated to a higher authority.
2) Our past experiences may not be enough to validate a path of action.
3) Some really "good" ideas will not be acted upon.
4) Some really "bad" ideas will be carried out.
5) The person who knows the Bible best (and I don't mean the person who is most opinionated about the Bible or the person who beats a few particular Bible passages to death, but rather the person who best understands the larger message of the Bible while being able to interpret the smaller and more specific portions) will be the person who speaks most authoritatively when questions are being answered.
6) I will not be able to just state my opinion without taking the time to hear what the Bible says about that issue.

By the way, I'd just suggest as an aside here, that number five might be a RADICAL shift in the way most business is done in most churches in America.

How would this play in reality?

Q: I'd like to talk to you about the music the teenagers are listening to.
A: Here's what the Bible says about that. We're to worship God with a variety of instrumentation and musical styles that reflect the wide diversity of his character and His church. Check out Psalms and Revelation for examples.

Q: I'm tired of the legalistic old people in our church.
A: Here's what the Bible says about that. We're to honor and respect those who are older than us. We're also to learn from them. Maybe we need to find better ways to show honor to them rather than just criticize them for legalism.

Q: I'm tired of the rebellious young people in our church.
A: Here's what the Bible says about that. We're to find ways to impact those who are younger than us. We need to not just teach them, but significantly invest in their lives so that they can grow up in the faith. Maybe we need to find better ways to build into them rather than just criticize them for being rebellious.

Consider also, if this way of doing things became standard operating procedure in a small group.

1) People would center their discussions around Scripture.
2) Most of the discussions about life would be about what the Bible says instead of about what people think or what "works"
3) People would go to great efforts to become more Biblically literate, just so they'd have more ability to discuss questions that arise.
4) People might begin their questions/suggestions/criticisms by saying, "What do you think the Bible says about..." (and then they might pause to listen to the response!)

So, what do you think? Are you ready to be part of a group that looks like that!

What if we made it our habit as group leaders to begin our answer to every question we're asked with:

"Here's what the Bible says about that..." 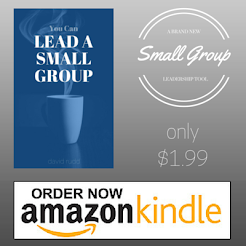